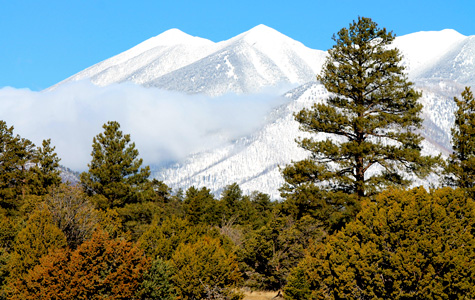 Here, in my community in Northern Arizona, I’ve had the tremendous pleasure to witness and work with youth who are profoundly reinvigorating our local communities with an engaged interest in our social and natural environments.  In our unique place, here on the edge of the reservation, young people are re-enacting the significant events of their ancestors’ lives, on stage, and in film.  Teens are making documentary films about heritage foods, their local social and environmental issues, and their own community histories. Youth are raising awareness of the issues most important to them and are actively contributing to the well being of the community.  They proudly look to their local communities, histories, traditions, and environments for inspirations for creating films, plays, music, websites, and other art to tell their own stories and share with their families, their community, as well as the wider society.  Our youth here are doing all of these, and more, at the STAR School, and with the Outta Your Backpack Media Collective, in Youth of the Peaks, and even in my own family. 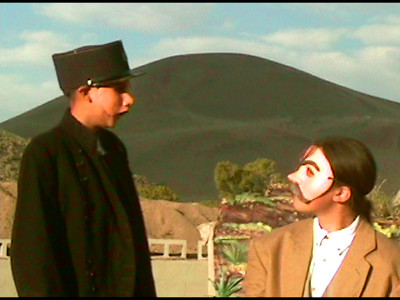 I am privileged to direct the media arts program at the STAR (Service to All Relations) School, an internationally recognized leader in Place Based Education located at the edge of the Navajo Nation.  STAR is also the first completely off grid, all solar and wind powered charter school in the country.  During my first year teaching at STAR, I taught 5th – 8th Language Arts, Social Studies, and Drama.  I was encouraged by Dr. Mark Sorensen to do a cross-curriculum place-based project with my students that culminated in the play, Tolchaco, written and performed by STAR students for our entire community. 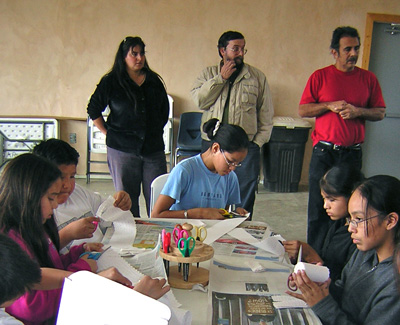 I invited local historians into our classroom as a part of our Social Studies curriculum and learned of a significant historical event that had happened locally between Navajo hunters and Anglo ranchers of nearly a century ago.  My students interviewed family members who had heard the story from their own grandparents (many of whom were directly involved in the incident) and launched a research investigation into the events and the time period of a local place known then as Tolchaco.  Critical discussions of Navajo and Anglo relations in our area both then and now were had throughout the classes, school and even the faculty.  My students working in small groups wrote a play depicting the events and the public trial.  For English class we concentrated on the writing, and in Drama class we rehearsed the scenes.  Soon the whole school was getting involved. The Art Class created the set, and the Home-Economics class made the costumes.  In the end nearly every student in the school and most of the staff participated in the play, re-creating this historical memory of our place. Tolchaco was performed for our local community in an outdoor ampitheater our students built modeled after the ballcourt in Wupatki, a local National Monument.  Then later staged for the larger Flagstaff community at the Museum of Northern Arizona, winning us the prestigious “Promising Practices in the Arts” award from the state. 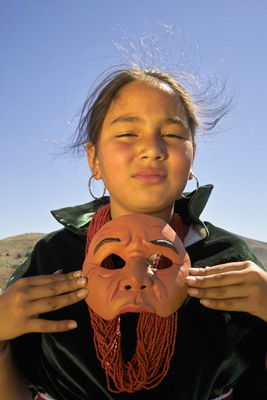 At first this type of project was new to many of the students, and staff, and it was a bit like pulling teeth to get them involved. But soon the students began to recognize that this was a part of their history; a part of who they are.  The play, which began with only seven participants, swelled up to include almost the whole school.  The emotional growth and empowerment we witnessed as these students began to deeply and personally incorporate a consciousness of the historical memory of their homes, including their ancestral heritage, their place, was the most amazing teaching experience I had in my 10 years at that point of teaching middle school. The transformations of students will forever bring joy to my heart.

The lead character was played by his own direct descendent and I was proud to watch him grow into an empowered young man as he wrote, then spoke, the words he imagined his great-grandfather speaking.  This student in particular sticks in my mind because he started the year as a student who wasn’t much interested in school.  As a matter of fact, he’d hardly turned in an assignment.  Then, due to the school’s eligibility requirements, he was almost not allowed to participate in the production.  This young man went home and in about a week he managed to bring in nearly a full semester’s worth of his missing work to ensure his involvement in the play. 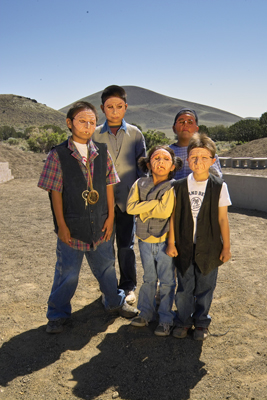 It was then that I realized the power of this type of education; place-based, project based, and community engaging. This project dynamically involved students researching and re-creating important events in their community history, and then presenting their new knowledge publicly.  Already holding two degrees, one in Education and the other in Environmental Communications and having experience in making films about environmental and social justice issues with youth in the early 90's, it was a short leap to see the beauty of how creating media arts projects with students could be very beneficial as a way to learn a place-based curriculum. I wanted to know more about why this was such a successful project, and begin to work out the process to demonstrate to other educators the value of this form of teaching.

I actually facilitated my first place-based film project with youth of Black Mesa in 1993, as my senior project for Antioch College, though at the time I had not recognized it as a place-based media project.  I was studying shoot-back documentary philosophy and ethics at Antioch and after coming out West and volunteering in the area affected by the Navajo Hopi Relocation Act, I knew I wanted to share with my home communities what I witnessed.  However, I wanted to participate in a socially responsible and ethical documentary style, so for my project I brought a truck-load of Antioch's filmmaking equipment out to a remote area of the Navajo and Hopi reservations and taught the youth in the community how to use the equipment for production filming.  The youth arranged and conducted all the interviews, mostly in Navajo language, and filmed all of the B-roll.  Back then though an editing suite was needed to edit, so one Black Mesa youth came back with me to Antioch to translate and edit their 28 minute film, Crimes Against Humanity. Through this process those youth began to take an active role in voicing what they wanted the outside world to know about their unique community and struggles, as well as becoming engaged in being the next generation of resistance.  Remembering this powerful transformative experience and witnessing the power of doing a place-based theatre project I knew it was time to work on seeing similar projects happen all over.

Creative media arts projects can be documentary, as well as narrative, lending itself to more aspects of the curriculum; not just history and language arts, but science and social studies as well.  Furthermore media arts projects are in many ways more enduring.  A play is limited to the audience at the time of performance; the feelings and emotions eventually dissipate. A film project can be viewed repeatedly, allowing students to share their work whenever they choose.

Thus, I entered the Master of Arts in Sustainable Communities Program at Northern Arizona University.  My goal was to deeply explore why and how this type of education can help to create good and sustainable communities, and to ascertain the skills necessary to be able to not only continue to teach in this manner, but to teach other teachers how to do the same. I accomplished my goals as is evidenced in the curriculum I call Place-Based Media Arts, my term to describe the integration and practice of media arts and place based education as described in my thesis. It is evidenced in the demonstration project film, In the Footsteps of Yellow Woman, and in my film The Making of Yellow Woman, as well as in projects I’ve been honored to facilitate at STAR School recently as the director of the STAR Media Arts Program.

The Sustainable Communities program not only allowed me to reach my educational objectives, it encouraged and pushed me to dig deeper and explore in new ways I’d never thought of before.  Because the program is interdisciplinary I was able to take classes in multiple departments.  I studied Documentary Filmmaking and upgraded my skills from my 1995 B.A. in Environmental Communications from Antioch College.  I studied Theatre Education where I produced a successful community play, It’s the Peaks, It’s All Connected and had the honor to work with the Youth of the Peaks in creating their moving and empowering skits “Brown in this Town.”  I also studied Augusto Boal’s Theatre as Rehearsals for Social Change, as well as Southwest History, Script-writing, and Place-based Pedagogy. I considered multiple aspects of what makes good and sustainable communities and had to think about the values of technology within our communities.  I was also allowed the freedom to take independent studies, drawing on the resources in the NAU and wider community to fully explore my interests and topics.   This allowed me the freedom to volunteer as a mentor and a coordinator with a local media justice collective, Outta Your Backpack Media, supporting the empowerment of indigenous youth through media arts / literacy trainings.  Through it all I came to a deeper understanding of how to positively contribute to my community’s well being.

During the time of my thesis project I was also home with my new baby and home-schooling my junior high school-aged daughter.  Since I wasn’t teaching at a school that year, and I wanted to investigate my ideas in meaningful education I enlisted my daughter Camille as my student to participate in the project.

I asked Camille to interview an elder in our community to learn about place-based oral history.  Her assignment was to show me what she learned through creating a media arts project.  She chose to interview her grandmother, Mae Tso,  who took Camille to the exact spot where Camille’s Great-Great-Great Grandmother, Yellow Woman, was shot in her pregnant belly by the blue coats.  Mae told Camille the story of her ancestor’s struggle to survive during the time of the Navajo Long Walk, 1864 – 1868.   This sparked an interest in Camille like I’d never seen before; even greater than her interests in wizards, fairies, and Harry Potter.