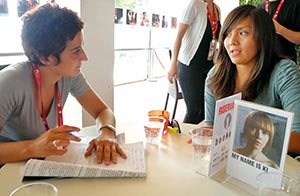 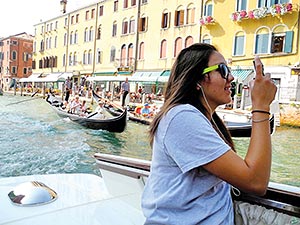 After wrapping an on-camera interview, Nole Yazzie, 13, an 8th-grader, wants to remind people of tribal history. His student group is working on a documentary about the Navajo's Long Walk with interviews of local elders.

"My hope is it brings back those stories. It's been over 100 years, it's important to talk about and not forget," he said.

They also use different storytelling techniques including lightbox animation for the film "Red Bird Saves the Corn," a traditional Spider Woman story. The school's Web site has a complete listing of student films.

Students have won first-place awards at the Arizona Student Film Festival and have screened their work at festivals in Austin, Texas, Seattle, Phoenix and Flagstaff. STAR School films are scheduled to be shown Oct. 12-16 during the Flagstaff Mountain Film Festival.

"Our program's philosophy is to get kids connected with the place where they live, to have a voice of where they are in that place," said Mark Sorenson, director of the school.

With a long educational career of working with Navajo students, the Sorensons opened the charter school in 2001 with a mission to incorporate a curriculum for place-based learning.

The educators chose the name STAR, an acronym for "Service To All Relations." It is part of the school's philosophy, which follows the Navajo teachings of k'e.

Sustainable and green practices are taught through classes about how to build a greenhouse and raise a garden. Both topics are among many featured as short documentaries.

"The films allow students to use their voice to get people to listen," said Mark Sorenson. "If students were writing a term paper, only their teacher would read it. With films, you might have hundreds or thousands of people see and learn about their Dine culture, and we're thrilled about that in a big way."

STAR School was featured in the documentary, "Valdagno, Arizona," directed and produced by the Pyoor Collective, a group of international writers and filmmakers, which was recently screened at the world-renowned Venice Film Festival.

The film follows Umberto Marzotto, an Italian songwriter who travels to the Navajo Nation to find a better understanding of himself. The film features interviews with Leupp residents, the metal band Blackfire, and former Miss Navajo Nation Radmilla Cody.

The film crew visited the school this summer where they met Butler, who was working as a student film camp mentor.

Impressed with the young, film savvy students, the crew did interviews about the school and its media program and its mission to bring cultural and place-based learning to students. They included clips of the students' films in the documentary.

Because of her film work, Butler was chosen to attend the Venice Film Festival for the film's premiere.

"The experience was amazing," said Butler, whose weeklong stay in Italy included a whirlwind of press interviews, festival screenings and sightseeing.

"This has definitely made me want to pursue a career in film," she said.

She has one other hope.

"It's important to inspire each other to do their best," she said. "I would like my films to inspire others and to be a resource for all my relations. It feels good to be an example for Native youth, to help kids and to show them anyone from a small rez town can do whatever they want."

To learn more or to watch STAR student films, check out www.starschool.org and click on the multimedia link.

BOTTOM: Kira Butler, from the STAR School in Leupp, Ariz., filming in Venice, Italy, with a Flip camera she won at the Arizona Student Film Festival.