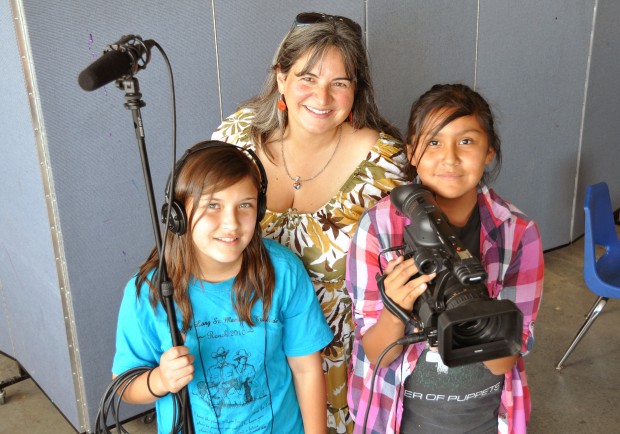 Visitors to the annual Navajo Festival of Arts and Culture next weekend will have these questions and more answered by a group of these young filmmakers when they screen five of their films on both days of the festival.

About eight of them will be at the museum to present their films, Tso said.

"The kids are really excited to go to the museum," Tso said. "These film projects are really good for the kids, to have their voice heard, to have adults commenting on their work is just invaluable."

Tso, who is of Scottish and Jewish ancestry, is married to a full Navajo, Francis Tso.

Tso, pregnant with their third child, is looking forward to a semester of eager film students.

They will learn steps to making a film, including pre-production (like brainstorming ideas), how to frame an interview, how to write the treatment, use of video and sound equipment, how to edit and how to speak to an audience.

"For me, I see the polishing is when they present their work," she said.

The students and the films will enhance the theme of the festival, "A Walk in Beauty," which will highlight two days of cultural immersion in the Navajo experience, bringing prominent musical performers, a traditional dance troupe and Heritage Insight talks from the region's experts, all to the museum and its grounds.

The festival will also gather 75 artists from all corners of the Navajo Nation at the museum, continuing the tradition of bringing artwork to market that began in August 1949, when 15 trading posts submitted 10 of their best rugs to the museum to compete for prizes.

"The festival's theme of 'A Walk in Beauty' describes the weekend's experience well," said Robert Breunig, MNA director. "It's a lovely way to spend a high country summer day among the Flagstaff pines, here at the base of the San Francisco Peaks, or in Navajo, Doo'Ko'osliid."

This year's entertainment under the big tent is some of the region's best, and there will surely be a monsoon shower or two."

In a benefit for their school, the students already presented and screened some of their films July 16 during a cultural and musical event at Pepsi Amphitheater at Fort Tuthill.

"They just did the Fort Tuthill presentation, and this time my students will able to talk about their films, talk about the subjects and the process of making films," Tso said. "For these kids to have an opportunity to do this at the museum, it's just amazing."

She said students sometimes opt to make a film instead of write a paper.

"Also, films are accessible; people are more willing to take five minutes to see a film than read a paper the kids have written," she said.

The STAR School opened Sept. 10, 2001 (the day before 9/11), with 23 students in grades one through six. By the beginning of 2010, the school reached the maximum of 130 students pre-school through eighth grade.

It was an inspired way to beautify a roadside junkyard halfway between Flagstaff and the Navajo reservation community of Leupp.

The school's name, STAR, stands for "Service to All Relations," a concept common to Navajo and other Native American cultures that stresses accountability and care for an individual's surroundings.

Founders Kate and Mark Sorenson, 20-year ranchers in the area, rely on solar power in their home and wanted to pass on the lifestyle to students, most of whom either live in rural homes near the school or in Leupp.

"We have built in green values from ancient times -- to take care of the Earth," said Mark Sorenson, who is the school director. "It's so gratifying to be able to speak about our interconnectedness with all things."

A federal grant from the Safe School/Healthy Students Initiative helps fund various programs at the school, including the peacemaking code at the school, which is demonstrated in the "Star Peace Making" film.

"We're a place-based education school," Sorenson said. "This area has a long history of having Navajo families, so, we have a philosophy that stems from the core values we find in Navajo peacemaking. It's so wonderful to have their videos so they can show how they do it."

He added values that come through Navajo are really universal.

The curriculum at STAR is also project-based. Projects vary and include building a greenhouse, planting gardens, tending wildlife and, of course, making films.

"The wonderful thing about the films is that they can be lessons to future students and to other people, like we are doing at the museum," he said. 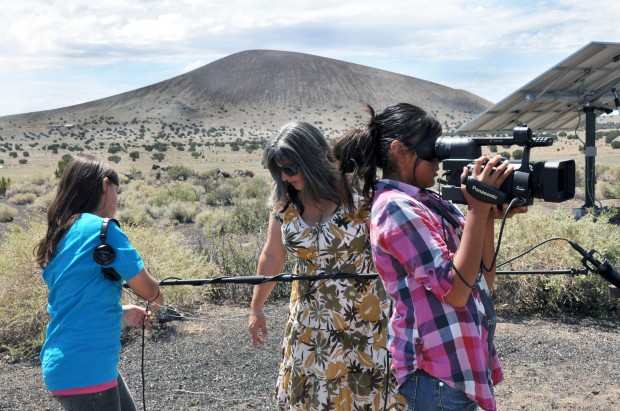 Five student films will be shown at MNA

Students with the Star Media Arts Program will be screening five films on both days at the Navajo Festival of Arts and Culture at the Museum of Northern Arizona.

The films deal with a variety of subject and are as follows:

2.) "Ta'che'e'," a short documentary on the sweatlodge ceremony.

4.) "Nitsidigo'i'," telling the story of how to make kneel down bread.

5.) "Do'koo'osliid," a youth-made film about their community's relationship with the San Francisco Peaks.

WHAT: 62nd annual Navajo Festival of Arts and Culture

Betsey Bruner can be reached at This email address is being protected from spambots. You need JavaScript enabled to view it. or 556-2255.

Copyright 2011 azdailysun.com. All rights reserved. This material may not be published, broadcast, rewritten or redistributed.